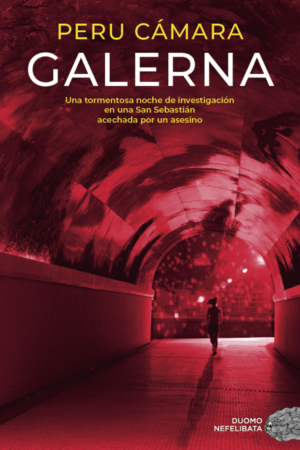 A sudden and violent storm with strong bursts of wind, short but torrential rain, thunder and lightning which often lashes the area of the Cantabrian Sea and the Bay of Biscay. The pathologist, Aitor Intxaurraga returns home and exhausted, slumps onto the sofa. The idea of spending a weekend of endless paperwork frustrates the atmosphere of the Friday night. After almost six months of internship, he already knows that passing the public examination has not been his last obstacle. Outside, the city of San Sebastián is swamped with a storm, not experienced in living memory. The sound of the telephone startles him: the police require his services in Peine del Viento. They have found a dead body and all the other pathologists are on vacation. The weather conditions and the fact that he does not have the support of his experienced colleagues make his task extremely difficult. The Basque Police have no doubts: the corpse does not present signs of violence other than those provoked by the sea waves hitting the rocks. After a preliminary examination, Aitor confirms that it appears to be an accidental death by asphyxia. The policemen want to remove the body and leave, as if they preferred to close the case quickly. But Aitor wants to do his job thoroughly and not miss even the slightest detail.

Helped by Jaime Otamendi, the only policeman who stays behind, Aitar finds a strange object embeded in the corpse. It looks like a fishbone. This is enough for the pathologist to take into account other hypotheses. Otamendi decides to trust in the young doctor’s instinct and follow the trail. Aitor and Otamendi go to the Aquarium of San Sebastián in order to obtain information about their find. Once there, Eva San Pedro, the biologist, tells them the fishbone is that of a puffer fish, known for containing large doses of tetrodoxin, a particularly strong poison. The trail they are following leads them towards uncovering a complex plot and a series of crimes, violent and elaborately executed, against the promoters of a large-scale project, Sautrela XXI. This initiative, led by some of the most eminent personalities in the city, is designed to create a pioneer team to investigate marine species and to become the world landmark in their culinary applications.   During the night of relentless wind Aitor, Otamendi and Eva undertake their own investigation into the supporters of the ambitious project. They will find out that some of them, including some students, are at risk.  In their search for solutions they will uncover the hidden face of the beautiful city, one that is rife with political corruption, violence and sexual abuse. A hidden reality that might give unsuspected people enough motives for violent action.